skip to main | skip to sidebar

Yup, again. And, it's supposed to do it most of the week! It's even starting to stick a little bit!! The kids were so excited this morning. I love seeing the world through my kids' eyes. It really helps put things in perspective for me and to take a step back and look and see, maybe things aren't really as bad as I always make them out to be.

Atley was very excited this morning. He got a big boy bed last night. Charlie has been sleeping in a port-a-crib since he outgrew the bassinet. He was only about 4 inches off the floor, and with him being sick, I was getting worried. Atley had a little toddler's bed, which had the crib mattress in it, which is why we didn't want to get another crib mattress. For just a little more, we could have a regular mattress. Well, my mom bought Atley a mattress set yesterday. She had gotten the girls their bunk beds, too. So, last night we set up his bed. It's just a frame with a mattress set right now because we eventually plan on getting the boys bunk beds, too, but he was so happy! I picked him up a set of Spiderman sheets. Tuesday, we're going to get him a big boy pillow, because he has always used toddler pillows before. Then, Dan put the crib together last night. We were missing 4 locking nuts. So, he improvised, made it even more secure than it was, and Charlie got himself a new bed, too! He seemed so excited. He was laying on our bed watching so I could help Dan, and he smiled and kicked and cooed looking at it the whole time. He was nice and warm and seemed to sleep better, too. I'll get pictures up of the both of them later.

I FINALLY made some progress on the sleeve! Not much, mind you, but some. I decided Atley is small enough, he won't recognize a knit sleeve still OTN as part of his finished sweater, so I got it out yesterday afternoon while the kids were playing and Dan was fetching mattresses. It's about half way done. If I can get some good work done today, I'm hoping to be able to work on the sleeve tonight and finish it up!

The mattress purchasing was a trip in itself. I had seen advertised that this one place had twin mattresses for $39 a piece. So, I sent Dan, with the intention of just getting the mattress since you can't use box springs on bunk beds for whenever we get those. Well, it was $39 a piece...if you bought the mattress, box springs, and bed frame, but you couldn't buy them separately at all. Then, I called around some more. Sears had a 50% off mattress sale. With the 50% off, their cheapest mattress (not box springs too, just mattress) was $169!!! So, I finally got ahold of a different mattress store, who said they had the mattress and box spring set for $99, and I asked how late they were open, the whole schpiel. (By this time, after Dan understood my intentions with the just the mattress thing, he informed me the box springs were necessary.) So, he went to the much closer mattress store, and they told him they only had 1 in stock and it was reserved!!!!! Well, he gave them our sob story about the baby being sick and cold on the floor, etc., and apparently the lady felt so bad, she sold it to him!! For once, luck was finally on our side. (Though I do feel bad if the other people ever showed up last night to get it, though he did go about 2 hours before close.) 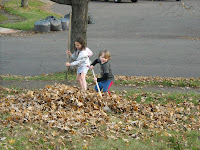 We also went to a couple of craft shows yesterday. The one especially was really crappy. The other was nice. There were some cute crocheted ponchos. The lady tried to sell them to me. I really just wanted to go to price how much people were selling things for. They also had a little rummage sale there, and I bought Atley a little tikes gas pump for his cozy coupe. He was so excited. I also got each of the kids a chocolate sucker. I LOVE those things. They all worked hard raking leaves Friday after school, so that was their treat. I'll try to post pictures of that later, too. I got a good one of Ari and Atley mid air while jumping into a pile of leaves with Ari's hair flying! 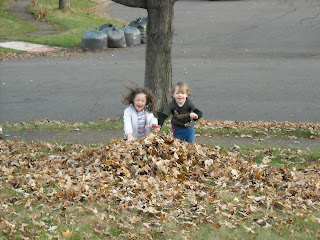 eeek, snow?? i am so not ready! my kids would be thrilled though :)

Snowing?! Wow. It's not that cold yet. We've had a good amount of rain, lately, though.

I love the pictures of your kids playing in the leaves! It makes me want to be a kid again...

A site with proceeds going to breast cancer research.

A dishcloth knitting pattern calendar with proceeds to benefit breast cancer awareness. Picture of dishcloths at bottom of blog. (It wouldn't fit in the side bar!)

Bats in the Belfry

Michelle
Ohio
I'm a WAHM with 4 kids. I knit and crochet in my spare time. On Ravelry, I'm stitchywitchy. On Twitter, I'm aderyn3.